One of the world's greatest music names, Sir Rod Stewart, a voice behind hits such as "Sailing," "The First Cut Is The Deepest," "Rhythm Of My Heart," and "Maggie May," arrives to Zagreb on the other day of February.

Sir Rod Stewart has been dubbed the legendary Rock and Roll Hall of Fame twice and is one of the best-selling artists of all time who has sold more than 200 million albums worldwide over five decades of career. His many successes include six consecutive albums featured on top of the UK charts, including 62 hit singles in the UK and six # 1. In the US, he launched 16 singles that entered the top ten, and four of them won the Billboard Hot 100 chart first. In 2016, he received the title of a knight for his merits in music and humanitarian work.

Ticket sales have already begun, and information can be found at www.eventim.hr. Members of the Roda Stewart fan club will have access to exclusive content, photos, video materials and will be able to procure tickets in pre-sale, and those who are just planning to access this club can find information at https://fanclub.rodstewart.com/signup/.

Stewart's great sense of humor and unique style is the ultimate musical spectacle, so do not miss to see this superstar live!
Tickets for the performance of the pianist legend on February 2nd at the Zagreb Arena can be purchased via www.eventim.hr 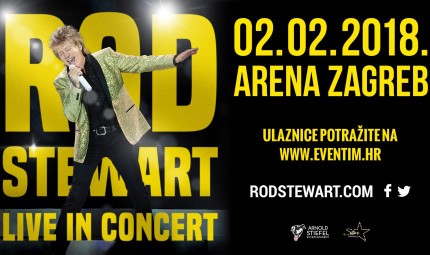