The Zagreb Arena will once again be the scene of the ultimate musical spectacle. On the occasion of the International Women's Day, the singing star of everlasting glory Andrea Bocelli will appear for the fourth time in front of the local audience, who has always been thrilled with enthusiasm and ovations. The reactions are all deserved because the name of this Italian tenor is a guarantee of a unique and top-notch music event that will satisfy even the most demanding classical music lovers.

"No one decides to become a singer, people's reaction decides for you," says Andree Bocelli, who best describes the way of this charismatic artist. Originally from the populous Tuscan region of Tuscany, from which the musical giants Puccini and Mascagni sprang up, the world's glorious ways set off nearly a quarter of a century by winning the festival at San Remo. Soon after, he followed the first major role in Verdi's Macbeth opera, after which the success was unstoppable. Nevertheless, the song "Con te partiro" is considered to be the biggest turning point, whose version of the duo with the world-famous soprano Sarah Brightman in 1996 was the top of the music charts and eventually became one of the most popular songs of all time. Successes continued - Through numerous appearances and published albums, Bocelli gained the favor of the widest audience, but also a colleague of musicians and music critics. His 14th studio album "Passione" in 2014 marked the collaboration with stars Jennifer Lopez, Nelly Furtado and trumpeter Chris Botti. For her next studio album, she received the Grammy Award nomination for the category of Best Traditional Pop Vocal Album.
After stage lights such as Carnegie Hall, Roman Coliseum, Opera in Sydney and Berlin, and New York Central Park, Andrea Bocelli made a real music treat for the audience in Zagreb Arena. The announced program anticipates two parts - in the classical part the tenor will perform the most famous opera arias, while in the second part will devote himself to his own greatest hits. After 80 million sold soundtracks and numerous awards, the tenor whose impressive voice with a wide singing range is considered by many as the voice of the new millennium, will hold a new magnificent performance on a day devoted to all ladies.
Tickets for this concert show can be bought at www.eventim.hr. 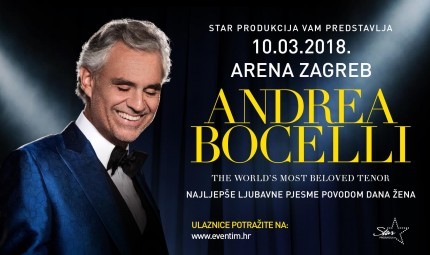